Here are five quotes reacting in very different ways to the Charlie Hebdo attacks in France.

” We must in the days to come, make sure that this pain transforms itself into concrete actions, … With the pain, we have already begun to work on the response. “Frederica Mogherini, High Representative of the European Union for Foreign Affairs and Security Policy (January 8, 2015)

” Our composure is that of a country that has not faced a fundamental test of this kind yet. But when push comes to shove, we have stuck together until now. I am confident that this would also be true in the case of a terrorist attack. “ German Interior Minister Thomas de Maizière (January 12, 2015)

“ I think we are at risk because there are a group of people who believe in this fanatical death cult of Islamist extremism. You can’t appease them; they hate our democracy, our freedom, our freedom of expression, our way of life. It would be wrong to think there are a set of behaviours we could adopt to make us safer.” David Cameron, British Prime Minister (January 14, 2015)

” Immigration and cultural questions related to that must be discussed in a much more open, honest and straightforward manner than until now. I hope that a composed, calm analysis of the recent events will guide European leaders and Brussels towards a tough policy restricting immigration ” Hungarian Prime Minister Victor Orban (January 11, 2015)

As I look back on this horrendous day for freedom of expression around the world, I still have difficulties sorting through my emotions. I distinctly remember, for example, the moment at which I got the news : 12 people dead at the headquarters of the French magazine Charlie Hebdo after it was attacked by gunmen with assault weapons.

At first, I just could not believe it. It kind of felt like an episode of the TV show Homeland, but then I realized that it really had happened here, in Paris, less than a mile away from my very office. Denial was over and that is when confusion and disgust started to set into my system. What can we expect from the future when confronted with such violence and intolerance ? Of course, I truly feel for the families of the victims, who have to endure the media torture on top of their pain. Tweets on the topic keep popping on my newsfeed, and only echo the dark feelings that are shooting through me and in the end it’s the French satyrical news website LeGorafi (kind of like the Onion in the US) that maybe managed to sum up in three words how I felt in that moment : “monde de merde” (litterally, crappy world, but this could be a reference to the French translation of F**k my life (“Vie de Merde)”, and could therefore be translated as “F**k the world”).

As the hours went by, I guess I also felt more and more powerless. Here I was sitting in front of my screen, unable to focus on my daily work and sharing pictures and twitchy statuses about the attack (in other words, doing nothing of consequence). I was hitching for action, anything that would allow me to get rid of a bit of the frustation building up as I receive controversial reactions to the attack in my inbox.  Fortunately, the whole office had understood that our work was done for the day. By 5PM, a group of my colleagues and myself were heading out to a rally at Place de la République to support the victims’ families and freedom of expression.

As we got out of the metro, we did not know what to expect. We emerged from the depths of the underground not too far from the statue that towers in the center of the huge square, and tens of thousand of people were already crowding the place. Above all, the relative silence was striking, almost solemn. I had never been such an event. People spoke in hushed voices and cautiously observed the mass surrounding them. Every now and then, someone would scream “Liberté”

(Freedom), and five others would respond “d’expression” (of speech). Or the crowd would start clapping hard, while crooning the word “Charlie, Charlie”. Here and there, there were big signs on which the most famous satires of the magazine had been reproduced, or else the now iconic hashtag #JesuisCharlie (I am Charlie). Hours went by, and the ranks of the supporters got tighter and tighter as new people kept arriving. At some point, I listened to the conversation of a nearby group of young people discussing their fear of a new attack, while realizing that despite that fear, they just HAD to be part of tonight’s rally.

So far nobody has had the time to use this tragedy for another purpose, and there is one thing above all that I will remember : today’s symbol is not a French flag, but a simple pencil. Today, it was not only France that was under attack, but freedom of speech in the whole world, and that is why the crowd held up pencils and pens towards the sky.

Forget about hate, I’ll bring freshly sharpened pencils in front of the headquarters of Charlie Hebdo! 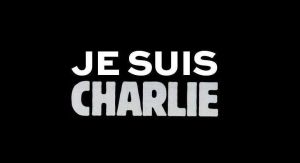